Shop Barnes&Noble.com - Why Not? 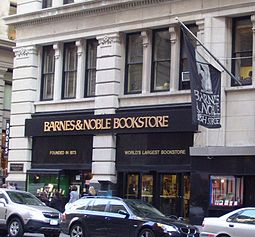 Barnes & Noble, Inc. is the largest book retailer in the United States. It operates mainly through its chain of bookstores headquartered in New York City. The company is known for large, upscale retail outlets, many of which contain cafes serving Starbuck's Coffee, and for deeply discounted bestsellers. The company operates over 700 stores (as of October 2010) in all 50 US states in addition to over 600 college bookstores.


Barnes & Noble originated in 1873 when Charles Barnes opened a book-printing business in Illinois. The first true bookstore was set up in 1917 in New York City. Before creating its website, the company sold books directly to customers through mail-order catalogs. It first began selling books online in the late 1980's, but the company's website was not launched until 1997. The site now carries over 2 million titles.


I first fell in love with Barnes & Noble bookstores in the late '90s. I was living in a small town at the time and when the store opened up, it was a BIG deal. The atmosphere was so appealing. I was immediately lured in. Reading has always been a hobby of mine, so I would go there and spend hours looking at the latest releases and sipping on a latte. I still enjoy doing that.


Even though Barnes & Nobles is technically my competitor (since I own an online bookstore, too) I still shop there. I think they have an amazing business model. I have tried to implement some of their strategies. I have learned from them. I know The Quality Corner will never be as big as Barnes & Noble. I don't even hope to. I've only wanted to have a small piece of the business. However, I firmly believe in the saying, "if you can't beat 'em, join 'em." So, I have become an affiliate of Barnes&Noble.com. You will see links to their products on my blog. Since B&N is such a large company, they are able to offer some great prices. Honestly, it's hard for me to have competitive prices. I want my readers to get the best possible deals. As an affiliate, I will pass on the best deals to you. Enjoy!