Fufua means “awaken” in Swahili. To awaken means “to wake up; to rouse to action; to come or bring to an awareness.” In Timothy George’s novel, Awaken, he vividly paints a picture of a character that is awakened to his role and purpose in life.

The main character in this novel, Thomas Jet, is a successful businessman in Chicago. His father recently died. Before his father died, Thomas made a promise that he would attend his family reunion. He is apprehensive about traveling to visit family that he’s never met before. He is reunited with much more than just family. The family reunion changes Thomas’ life forever.

Thomas meets an old man named Dr. Oble. The old man greets Thomas by saying, “Welcome home. Fufua!” Even though they’ve never met, Dr. Oble is intimately acquainted with Thomas. The encounter with Dr. Oble raises a lot of questions in the mind of Thomas. He returns home to research his family history. He uncovers shocking secrets.

Thomas can’t stop thinking about Dr. Oble. He is determined to speak with him again to find out how and why this old man knows so much about him. The next time Thomas meets with Dr. Oble, even more secrets are uncovered. Thomas is awakened to his true purpose in life. He finds out about an ancient African secret society that his ancestors were a part of. Thomas discovers that he is destined to be a member of this brotherhood. Soon, he realizes that his connection to this secret society will put his life in jeopardy.

As Thomas digs deeper into his ancestral roots, he finds out about a tremendous lost treasure. He sets out on a quest to find the treasure. Thomas is not the only one looking for this hidden treasure. His foes are willing to kill for the fortune. Many lives are lost. Thomas wonders if he will be next. At every turn, Thomas meets someone new. To stay alive, he must determine who is an ally and who is an enemy.

This fast-paced story has many twists and turns. It is truly unpredictable. Timothy George takes his readers on a roller coaster. The adventure is very thrilling and entertaining. George’s masterful use of suspense keeps the reader enthralled. This novel is one-of-a-kind and a must-read.
Posted by The Quality Corner No comments: 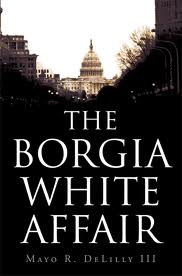 “I can retain neither respect nor affection for a government which has been moving from wrong to wrong in order to defend its immorality,” stated Mohandas K. Gandhi. This quote appropriately introduces a section in the novel, The Borgia White Affair. In his debut novel, author Mayo R. DeLilly skillfully unfolds a government scandal that threatens the peace and security of a nation.

The novel is set in modern times. A war against drugs has been waged. It has been a long, losing battle. The government develops a scheme to finally rid the nation of drugs. While the goal is a noble one, the method is unconventional and it leads to untold death, pain and suffering.

Dr. Lester Phillips is a good man. He works hard and he loves his family. He is a model citizen. He grew up in a rough neighborhood and he has a lot of compassion for people from all walks of life. As a physician, he becomes keenly interested in the rise of cocaine deaths. He begins to search for answers. He teams up with a colleague and they begin their quest. The novel spans several seasons. The death toll continues to rise. As Dr. Phillips gets closer to finding out the source of the sinister plot, his life and that of his colleague becomes endangered. As the plot continues to unfold, it gets thicker and thicker. More and more characters are involved and more is at stake. In their wildest dreams, they could not have imagined where their search would lead them.

This fast-paced story is truly a page-turner. While entertaining, it challenges the reader’s sense of morality. The story touches on political and social issues such as racism and nationalism. One of my favorite quotes in this novel is from the main character, Dr. Phillips. After he loses one of his friends to drugs, he cries, “There’s no difference. No difference between the iron shackles my forefathers wore as slaves and the shackles of drug dependency that subjugates many black people today.” In the end he concluded, “The answer to the drug problem in this country will never come from the end of a needle or the barrel of a gun…the answer lies in the heart!” Powerful statements like these are found all throughout the book.

Author Mayo DeLilly practices General Pediatrics in Los Angeles, CA. He attended Howard University in Washington, DC. DeLilly uses Washington, DC as a backdrop for the novel. The main character, Lester Phillips, is a Pediatrician in DC. It is very apparent throughout this book that DeLilly is writing about things that are familiar to him. He vividly describes the streets of DC. The medical terminology used in the writing reveals the author’s depth of knowledge. DeLilly’s detailed writing style made this novel very interesting. I am confident that anyone who reads The Borgia White Affair will enjoy this heart-pounding thriller.