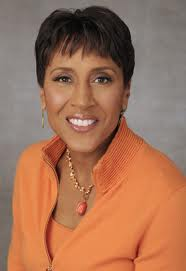 When not traveling around the country or the world covering breaking news events, Roberts is at "GMA's" studio in Times Square conducting interviews with a diverse group of newsmakers. Her headline-making interviews include: President Barack Obama; First Lady Michelle Obama; actor Sidney Poitier; basketball legend Kareem Abdul-Jabbar on his battle with leukemia; and Lisa Niemi on the loss of her beloved husband, Patrick Swayze.

Roberts has also done extensive reporting around the globe. She traveled to the Middle East with former First Lady Laura Bush, who was on a mission to raise awareness about breast cancer in the Muslim world; to Africa with former President Bill Clinton for a first-hand look at the AIDS crisis in that part of the world; and to Mexico, where she scaled the Mayan Pyramids as part of "GMA's" "The New 7 Wonders of the World" series.

Roberts also broadcast live from inside the Centers for Disease Control in Atlanta in October 2009. It was the first time television cameras were permitted inside the CDC's special command center tracking the H1N1 "swine flu" virus.

In November 2009, Roberts hosted her first primetime special, "In the Spotlight with Robin Roberts: Bright Lights. Big Stars. All Access Nashville." The special took Roberts to Nashville, where she interviewed some of country music's biggest stars. She followed that with another primetime hour featuring an exclusive interview with Janet Jackson, the performer's first since the death of her brother, Michael.

In February 2009, Roberts made her red carpet debut as co-host of the ABC Television Network's Oscar pre-show, reporting live from the 81st annual Academy Awards with fashion expert Tim Gunn.

Roberts played an active role in ABC News' coverage of the 2008 presidential race. She interviewed the candidates and a wide-range of political newsmakers for "GMA;" traveled to Des Moines, Iowa to moderate a town hall debate with then-candidate Hillary Clinton; and reported live from Washington, D.C. on Inauguration Day. Roberts was the first journalist to interview President Barack Obama after he was sworn in as President. Roberts also traveled the country by train with the "GMA" team as part of the network's ambitious "50 States in 50 Days" initiative in September 2008.

Roberts was diagnosed with breast cancer in June 2007. Her courageous and public battle has been recognized with awards and honors from organizations around the country, including: The Susan G. Komen Foundation; The Congressional Families Cancer Prevention Program; and Gilda's Club, a non-profit organization founded by the late Joel Siegel.
In March 2007, Roberts' first book, "From the Heart: 7 Rules to Live By," was published by Hyperion. An updated version of the book, including an additional chapter on her battle with breast cancer, was released in 2008.

Roberts is a native of the Mississippi Gulf Coast and currently resides in New York City.
For additional information, visit ABCNews.com
Posted by The Quality Corner