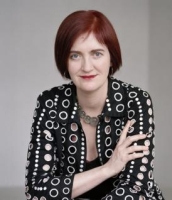 Emma Donoghue was born in Dublin, Ireland, in October 1969, she is the youngest of eight children of Frances and Denis Donoghue.  She attended Catholic convent schools in Dublin, apart from one year in New York at the age of ten. In 1990 she earned a first-class honors BA in English and French from University College Dublin.  She  moved to England, and in 1997 received her PhD (on the concept of friendship between men and women in eighteenth-century English fiction) from the University of Cambridge. From the age of 23, she has earned her living as a writer. After years of commuting between England, Ireland, and Canada, in 1998 she settled in London, Ontario, where  she lives with Chris Roulston and their son Finn (7) and daughter Una (4).

Donoghue works in many genres such as drama and literary history, howerver she is best known as a fiction writer.  She has won a long list of awards for her writing.  She is the author of the international bestseller, Room.

I had not heard of Emma Donoghue until I read Room.  I have one word to describe that novel - excellent.  Read my review here.  For more information on this author, visit www.emmadonoghue.com.
Posted by The Quality Corner