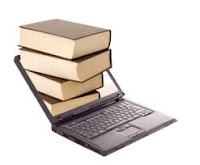 The word "eBook" barely existed over a decade ago.  Now it is part of our common vernacular.  eBooks have actually been around for quite some time on the internet.  Early eBooks were generally written for specialty areas such as technical manuals.  They were originally intended to be shared among small groups.  I remember those days.  I used to work for an IT company and I had the privilege of writing a few technical manuals.  Times have changed.  Major publishing companies began to take notice of the eBook movement around 2001.  Over the past ten years, eBooks have become increasingly popular.  This month, The New York Times began including eBooks on the Best Sellers list.  A Google search of the term "eBook" generated over 193 million results.  I don't think that anyone could have predicted how vast the eBook market would become.

Because of the popularity of eBooks, special eReaders hit the market.  The most popular seem to be Amazon's Kindle and the Nook by Barnes & Noble.  In July 2010, Amazon reported that eBook sales for the Kindle surpassed sales of hardcover books.  Some think that paper books are going to become a thing of the past.  I'm not convinced of that.  I still prefer to have a real book in my hand with pages that I can physically turn.  I think that there are pros and cons to using eReaders.  I can see the benefit in some circumstances, but not all.  I've read my share of eBooks on my laptop.  I don't currently own an eReader.  However, I plan to purchase an iPad in the near future and I look forward to reading books and magazines on it.

People often ask me how the eBook market has affected my business.  So far, it has not had a negative impact.  However, I see the importance of keeping up with the times.  I firmly believe - "if you can't be 'em, join 'em."  I expect eBooks to continue to increase in popularity, so I intend to get my slice of the eBook pie in the future.
Posted by The Quality Corner