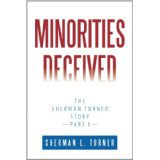 Resilience is defined as “the ability to recover from illness or adversity.”  We all face various degrees of adversity in our life.  Therefore, resilience is an extremely important quality to cultivate.  Sherman Turner is an outstanding example of resilience.  He has chosen to share his remarkable story in two books – Minorities Deceived and Kenya: Rehabilitation.  His story inspires hope and helps readers to develop determination to overcome all obstacles.
Turner grew up in a poor family in Buffalo, New York.  Schools in his area were substandard.  It was very difficult for him to get a good education.  Despite his humble beginnings, he worked very hard to become a plumber.  Because of racism, he encountered many obstacles.  Even though Turner’s grades were the highest in his apprenticeship class, it was difficult for him to secure employment to receive the field-training that he needed.  He chose to take the Master Plumber test and start his own business.   At that time, the city of Buffalo had never had a black master plumber.  He received death threats for taking the Master Plumber test.  That fact did not stop Turner.  He was determined and it paid off.  He became Buffalo’s first black master plumber.  He paved the way for other minorities to reach their potential.
He worked as a contractor for the Small Business Administration (SBA).  Turner was accepted into the SBA 8(a) Business Development Program.  This program was designed to assist small businesses that are owned and operated by individuals who are at a social and economic disadvantage.  Turner intended to hire minority workers on his jobs.  However, the “Wall Street Money” contractors did not want black workers on government jobs.  Turner struggled for many years to fight for minority rights. 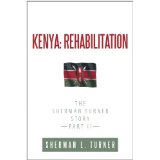 Partially due to the stress at his job, Turner suffered a massive stroke.  The stroke left him in a coma for several weeks.  When he woke from the coma, he realized that he was paralyzed.  In his second book, he tells the story of his recovery.  It was a tough road for him.  Again, he was determined to overcome all obstacles.  He worked hard to learn how to walk and talk again.  As a result of the stroke, he lost much of his memory.  His doctors encouraged him to learn a new language to help with his memory loss.
Turner enrolled in a local college and began learning Swahili.  He could have easily remained in that school close to home.  Instead, he chose to travel to Kenya to attend the School of Languages and Rehabilitations.  It was no easy task to travel such a long distance.  He did not let his disabilities stop him from making the trip.  In fact, he made several trips to Kenya.  He regained his memory and graduated from the language class.
The Sherman Turner story led me to question my own resilience.  I wondered how I would fare if I had to face all the hardships he endured.  This story truly touched me.  Turner’s life shows the strength of the human spirit.  Anyone who reads this heartwarming memoir will be strengthened and encouraged.
Posted by The Quality Corner